On 16th July 2015 the House of Lords debated a motion by Lord Alton of Liverpool, “that this House takes note of worldwide violations of Article 18 of the 1948 Universal Declaration of Human Rights and the case for greater priority to be given by the United Kingdom and the international community to upholding freedom of religion and belief.” During the debate the Bishop of Leicester, Rt Revd Tim Stevens, gave his final speech before his retirement. A video of his speech can also be viewed here. Extracts from the speeches of other members taking part in the debate, paying tribute to the Bishop of Leicester, are also included below. 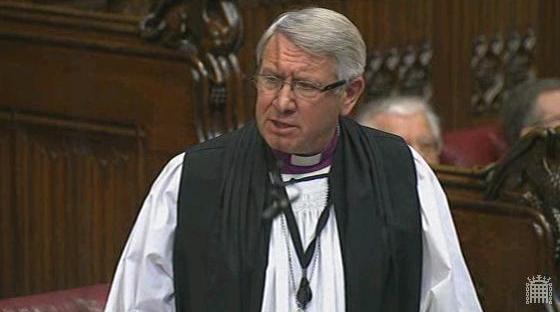 The Lord Bishop of Leicester (Valedictory Speech): My Lords, I want to add my thanks to that of so many others to the noble Lord, Lord Alton, for bringing this matter before us, not least as it provides me with an opportunity to make a final speech to your Lordships’ House on a matter of such overwhelming importance.

My retirement, I am delighted to say, will in some small way enhance religious freedom in this House by providing a seat for the first female Lord Spiritual in history to occupy this Bench in the autumn. It is especially good to be following the noble Lord, Lord Singh, whose contributions here testify to the commitment of this House to religious freedom in so many ways.

The spread of global religious revival in the 21st century is described by Mickelthwait and Wooldridge in their book God is Back. They argue that it is fuelled by market competition and a customer-driven approach to salvation. In the five years since its publication, they could not have imagined how those principles would mutate into the present appalling world crisis, so vividly described by so many speakers. The challenge to religious freedoms derives in part from treating faith as a consumer preference rather than the most profound definition of what it is to be human.

In my 16 years as Bishop of Leicester, we have learned much about the principles and practice of religious freedom and the way it shapes the deepest contours of the human psyche. As well as having local applications, that also has international implications. The first principle is that it is not enough simply to defend religious freedom; it has to be positively exercised in ways that encourage others to embrace it. It involves drawing on the spiritual resources of faith to unlock the best in others, to speak on behalf of the voiceless and to create community. When a young Nigerian Christian was murdered in Highfields in Leicester two years ago, there was an immediate retaliatory attack on an entirely innocent Muslim family, killed by a fire bomb on the same day. The tensions were palpable, but were eventually calmed by systematic, careful conversations and the public ritualising of grief and reconciliation on both sides.

Secondly, the principle that religious freedom is an inalienable right means that we interpret an attack on one faith as an attack on all peoples of faith. Treasuring the dignity of every human being includes treasuring the rights of others to their beliefs, especially when we disagree. That is why the Muslim leadership turned out in strength the other day at Leicester Cathedral to respect the victims of the Sousse massacre two weeks ago.

Thirdly, freedom is not a passive state. It results from the dynamic process of actively learning how others live and what they believe, and of sustained and co-operative support for each other in shared enterprises. Here, too, local practice can inform international strategy. We need to learn the best habits of face-to-face conversations with those we disagree with, especially over the big challenges of the day—climate change, poverty, conversions, gender equality and so on.

It has been an immense privilege to play a small part in the life of this House over the last 12 years and to Convene the Bishops’ Bench for six of them. It has confirmed me in the belief that the presence of the Bishops here serves rather than impedes religious freedom in countless ways. It has been rewarded with friendships, kindnesses, courtesies and opportunities far beyond my expectations or desserts. I am deeply grateful for that and even more grateful for the responsibility to think and speak carefully about how a vision of the kingdom of Jesus Christ can still shape and inform public policy today. Your Lordships’ House deserves the attention, interest and prayers of all people. It will certainly have mine in the years ahead.

Lord Alton of Liverpool (CB): My Lords, I begin by thanking all noble Lords who take part in today’s debate. We have a speakers list of great distinction, underlining the importance of this subject. It is also a debate that will see the valedictory speech of the right reverend Prelate the Bishop of Leicester, who has given such distinguished service to your Lordships’ House.

Lord Mackay of Clashfern (Con): I am glad that the right reverend Prelate the Bishop of Leicester is speaking in this debate, although I am very sorry that it will be a valedictory speech. He has given most distinguished service in this House and also in his diocese in an area where there is a great deal of difference and, I hope, also the dignity of difference in ethnic and other communities. I wish him well in his retirement.

The Archbishop of Canterbury:  I also pay tribute to the right reverend Prelate the Bishop of Leicester. He will be much missed by this House and I will miss him enormously for the wise advice he has given me on numerous occasions

Lord Carey of Clifton (CB): …it falls to me to thank the right reverend Prelate the Bishop of Leicester for his remarkable contribution over many years to this House and to wish him every success in what he goes on to do.

Lord Sacks (CB): .. I add my thanks to the right reverend Prelate the Bishop of Leicester for his warm, wise and inspiring contributions to public life, and wish him blessings in the years ahead.

Lord Alderdice (LD): I particularly want to acknowledge the contribution of the right reverend Prelate the Bishop of Leicester over many years. When I was Convenor of these Benches, I very much appreciated his work as Convenor of those Benches.

Lord Bach (Lab):  I hope that the House will indulge me for a moment or two—perhaps rather longer than would normally be the case—if I say something about the right reverend Prelate the Bishop of Leicester, or Bishop Tim as he is universally known in Leicester and Leicestershire. I am proud to call myself a friend as well as a colleague. I live in the diocese he has led for the last 16 years, and I only wish that more noble Lords present today had been present at the service held last Saturday at Leicester Cathedral to celebrate his tenure. There was hardly a dry eye in the house. The respect and affection in which he is held by all—rich and poor, black and white, old and young—was shown not just by the packed cathedral, with people following the service from outside, but by the extraordinary feeling that a unique and very special person who had influenced Leicester so much, with all its diversity, was actually leaving.

The right reverend Prelate will be hugely missed in the city and in the county, just as he will be in this House. Above all, he seems to me as good an example as I have ever known of the priest in the public space—a phrase I do not like. In other words, he speaks to his community about issues that actually affect their daily lives. His passion for social justice, I know, has been heightened by his experience in Leicester. Frankly, I do not think that this House or our country can afford to lose him. On a slightly lighter note, how can one not admire a bishop who chooses for his desert island discs a song by the boy band, One Direction, and whose chosen luxury item was an infinite supply of golf balls?

The Minister of State, Foreign and Commonwealth Office (Baroness Anelay of St Johns) (Con): If I may, I particularly add my support to the noble Lord, Lord Bach, in his tribute to the right reverend Prelate the Bishop of Leicester—it was well said by the noble Lord.