On 11th December 2017 Baroness Sherlock asked Her Majesty’s Government “why kinship carers who subsequently have their own child are not exempt from the two child limit.” The Bishop of Carlisle, Rt Revd James Newcome, asked a follow up question: 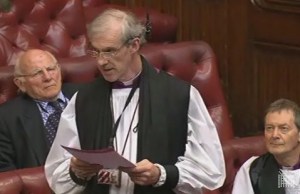 The Lord Bishop of Carlisle: My Lords, the Government have chosen to pursue a deficit-reduction strategy by opting for a fiscally cautious welfare policy. However, ​has the Minister considered that some British families are larger for reasons of faith or principle? Speaking on behalf of people of all faiths in this country, my question is: what plans does the Minister have for ensuring that such families and children are not discriminated against by the policy?

Baroness Buscombe: My Lords, as I have already said, there is nothing to stop anyone having a large family. There is total freedom of choice to have a large family. However, the Government’s view is that we have to be fair between those claimants on the one hand and, on the other hand, those taxpayers who support their own children solely through work.