On 7th March 2019 Baroness Jenkin of Kennington asked the Government “what steps they are taking to reduce the risk of female genital mutilation for girls in the United Kingdom and internationally.” The Bishop of St Albans, Rt Revd Alan Smith, asked a follow-up question: 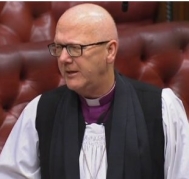 The Lord Bishop of St Albans: My Lords, the Government are to be congratulated on the various pieces of legislation that have been taken through. However, this is much more complex and is not simply a legal issue, as we have heard. That does not seem to solve the problem; it is clearly a cultural issue. The Minister has already referred to some of the attempts ​that have been made to change culture. What efforts are being made to talk to community leaders, who are some of the key people in those more traditional and sometimes hierarchical communities, to try to get the cultural change, so that this becomes an unacceptable practice and something which we really can see addressed?

Baroness Williams of Trafford: The right reverend Prelate goes to the nub of the problem: it cannot be solved by legislation alone. Certainly, we are doing some work around the world in giving UK aid. At home, we need to get to the point where those community leaders not only see that this is wrong but articulate that to members of their community, explaining that this is not only unacceptable and illegal but that it maims girls for life.