On 29th February 2016, the House of Lords considered changes made in the House of Commons to the Government’s Welfare and Work Reform Bill. Earlier, MPs had voted to reject an amendment to the Bill tabled by the Bishop of Durham and passed by the House of Lords, which made it a duty of the Secretary of State to report annually on income measures of child poverty. In its place Lord Freud, Minister for Welfare Reform, tabled an alternative Government amendment in the Lords, to require government to annually publish the child poverty income measures, without requiring a report to be laid before Parliament. The Bishop of Durham, the Rt Revd Paul Butler, and the Bishop of Portsmouth, the Rt Revd Christopher Foster, both welcomed this concession by Government. Lord Freud’s speech introducing that amendment can be seen here. The Bishop of Durham’s response can be seen here.The Bishop of Portsmouth’s response is below, in which he also pressed the Minister on points he had made at earlier stages about the two-child limit and impact on those who are bereaved or fleeing domestic violence. 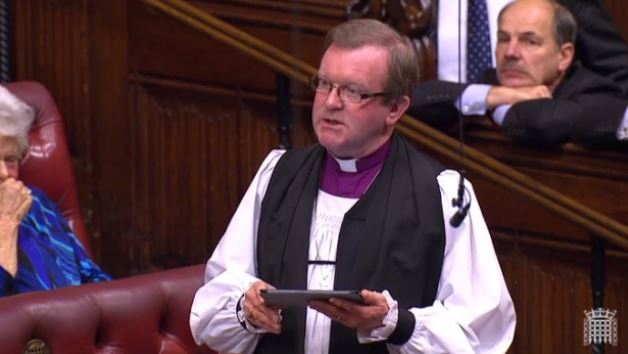 The Lord Bishop of Portsmouth: My Lords, I, too, am grateful for the Government’s decision to publish under obligation the three HBAI low-income measures, along with the further measure of children in persistent poverty. In welcoming this response to the clear wish of the House, I will not detain the House with my commentary on the tortuous routes to this wise and welcome decision, tempting though that is; we are in Lent and bidden not to succumb to temptation. As we have so powerfully and carefully considered in this House the plight particularly of children in poverty, I recall that the Minister said that he expected the Government to come under further pressure—I paraphrase—and I do not want to disappoint him.

Can he confirm that he retains an understanding of the special circumstances of children where there is bereavement or domestic violence? Widowed parents are not like other lone parents, and I hope that, as we look forward, there can be some recognition of that.

I reiterate the point that I made as I withdrew another amendment to this Bill: no society should tolerate violence. The Government recognise that in exempting victims of rape from the two-child limit. In the present proposals, those who suffer domestic violence are still encouraged to stick it out and put up with it or be penalised. If violence is wrong and to be deplored, then it is always wrong—rape, yes, but also the brutality, cruelty and horror of all violence. It is a thin line that divides rape and domestic violence, and it does no credit to a Government or a society that seeks to maintain such a marginal distinction. In welcoming these amendments, I wonder if the Minister can indicate that there can be still further consideration of the matters that I raise.

Lord Freud: My Lords, I thank noble Lords for their contributions and thank the right reverend Prelate the Bishop of Durham, who led in this area. I will make just one or two short points. In response to the noble Lord, Lord Kirkwood, I remind him that the forecasts of what happens to this measure of relative income are notoriously difficult to get right. I have been in this House on several occasions when there have been dire warnings that child poverty is about to go up over the next two years, but when you get to the figures two years later, it has not happened. I therefore hate having to defend myself against things that do not happen—it is bad enough having to defend myself against things that happen.

We have had a very useful debate on this area in this House. The point is that the debate succeeded in unpicking the concerns that noble Lords had, which is why we were able to find common ground. We are not in agreement in this area in our approach but we have found common ground here, and I hope both sides will be able to live with this amendment. However, I want to give some reassurance. One of the reasons we have brought forward this amendment is because we wanted to reassure the House and other people around the country that we take this whole issue seriously—that we have an agenda and we want to do something about this. We did not want to leave this issue with the impression that we were not taking it seriously. I can agree with the noble Baroness, Lady Sherlock, that I am convinced, as she is, that the publication of the HBAI will not go by without comment by someone on each occasion.

I will pick up on the point made by the right reverend Prelate the Bishop of Portsmouth, although I need to give him a two-handed answer. As I said when we went through this, we have separate arrangements—a specific set of payments—for bereavement. However, on domestic violence, which we dealt with specifically when we discussed it earlier, the right reverend Prelate has made reasoned arguments; I repeat my acknowledgement that this will remain an area of interest, at least for them, and anticipate the natural corollary of that. With those few words, I urge noble Lords to agree to the Motion.