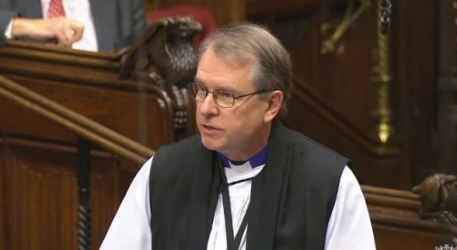 On 26th June 2017, the Bishop of Durham, the Rt Rev Paul Butler contributed to the Queen’s Speech debate on business, economic affairs, energy, transport, environment and agriculture. He argued for the importance of investment in the North-East of England and including all groups in discussions around Brexit, the Northern Powerhouse and the Industrial Strategy.

Bishop of Durham: My Lords, perhaps I may add my welcome from these Benches to the noble Lord in his role as Minister. I also look forward to hearing the maiden speeches of the noble Lords, Lord Colgrain and Lord Mountevans, which will be made during this debate.

Since arriving in Durham, I have been struck that life feels more precarious for many in the north-east than it does elsewhere. There are lots of reasons for hope, not least the social regeneration in my home town of Bishop Auckland, but the sense of precariousness persists due to deep structural disadvantages that the region has faced for decades, even centuries. It is against this backdrop that some of the changes to welfare in the last Parliament felt particularly acute and remain of very deep concern. It is also against this backdrop that the uncertainty of the Brexit negotiation is felt. It was in part this day-to-day experience of powerlessness that led many to vote to exit the EU. It would be a betrayal of the people, especially the most needy, if living and working in the north-east becomes more rather than less precarious as a result of leaving the EU. I therefore welcome the fact that much of the gracious Speech indicates some awareness of this danger.

I want to reflect on three aspects. First, the gracious Speech includes a commitment that:

“Legislation will be introduced to ensure the United Kingdom remains a world leader in new industries, including electric cars”.

It will be no surprise to those who know the north-east that my ears perked up at “electric cars”. We have a proud history of manufacturing and the importance of the industry to the region needs to be prioritised in the Brexit negotiations. We must develop further decent technological education and training that leads to good jobs. This must include engaging with the challenges that the next generation of automation will pose to the livelihoods of people and communities in the north-east and across the country. The Church of England has already carried out some invaluable work on the economic and ethical implications of automation and artificial intelligence, and we look forward to working with the Government to ensure that this work is used to make sure that we develop an industrial strategy ready for the challenges and opportunities that these will pose.​

Secondly, the gracious Speech included a commitment that:

“A new Bill will also be brought forward to deliver the next phase of high-speed rail”.

This will be between Birmingham and Crewe. A more interconnected country is to be welcomed. I would, however, like to repeat a proposal I made in the debate on the gracious Speech last year—that we start building HS2 from Newcastle as well. I worry that as long as we continue the approach of gradually moving north, we give the impression that the point of the project is to let the rest of the country share some of the benefits of London. If we think HS2 is truly for the benefit of the whole country, however, I encourage the Government to adopt a radically different approach. This must include serious investment in the whole of the rail network and the related infrastructure in and between every region. In Newton Aycliffe, the new Azuma trains are being built. It would be a tragedy if the region that builds the new trains does not benefit from them.

The rest of the country needs the north-east. We are a region that, despite uncertainties and higher levels of unemployment, is in many ways thriving and has plenty of untapped potential. Take our science and technology sector. The ONS finds that our life sciences and healthcare sector is the largest in England in population terms. Overall, this sector has 221,300 people working for more than 14,000 others. That puts us behind only the south-east and the east of England in this sector.

I was glad to hear commitments in the gracious Speech on the national living wage, although I hope we go even further than promised to ensure that this is a truly living wage. I welcome the commitment to workplace rights and ending discrimination. I hope the latter will include ending discrimination that currently affects refugees. The ultimate point of the northern powerhouse must not be simple economic growth, but thriving communities.

As we discuss the details of these measures and the wider industrial strategy, we must strive to incentivise investment that serves the poorest and strengthens communities. This underlines the importance of faith groups and other parts of civil society being strongly included in discussions of industrial strategy. Many communities across the north-east and the wider country have had decades of experiencing politics as “being done to” rather than “working with”. As this Parliament considers Brexit, the industrial strategy and the northern powerhouse, we must engage people of all ages, including our children, in the debate. Each of these discussions is an opportunity to invite all people into the process of building a Britain that truly works for everyone in every part of the country for the generations to come.​

Baroness Neville-Rolfe (Con): [extract] ..I want to make the case for early investment on transport pinch points. In the Autumn Statement, the Chancellor made £2.6 billion available for transport infrastructure. It is really good to see the automated and electric vehicles Bill in the Queen’s Speech and to hear the right reverend Prelate the Bishop of Durham talking about it and about north-east innovation. In the spring Budget, it was announced that £690 million was being competitively allocated to get transport moving.

The Parliamentary Under-Secretary of State, Department for Business, Energy and Industrial Strategy (Lord Prior of Brampton) (Con): [extract]..The right reverend Prelate the Bishop of Durham referred to the precariousness and uncertainty of business in the north-east where he is in Durham. It is true that pay growth and earnings have been stagnant for many people. It is hard to disagree with the analysis that too many people have been left behind and that, as the economy has grown, too few people have enjoyed the benefit of it. However, this is not a recent phenomenon; it has been a growing issue for most of my working life.