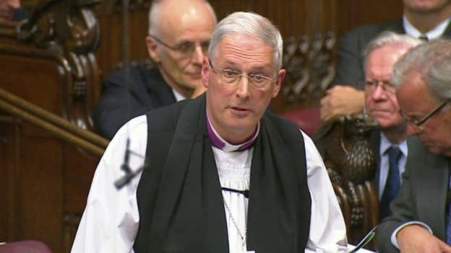 On 27th June 2017, the Bishop of Southwark, Rt Rev. Christopher Chessun, contributed to the ongoing debate on the Queen’s Speech. The Bishop’s speech addressed the strong response from volunteers and emergency services to recent events, and called for a re-examination of current resources. Government Minister Lord Bourne of Aberystwyth responded to the Bishop of Southwark’s speech at the end of the debate.

The Lord Bishop of Southwark: My Lords, I too wish to contribute to your Lordships’ debate on the humble Address. Last Thursday, the most reverend Primate the Archbishop of Canterbury observed in this House that the gracious Speech spoke of taking British values around the world, but for that to happen we need to know what we mean by British values. That applies equally to the measures under discussion today. Traditionally, these values have expressed themselves in a respect for the rule of law, local and national institutions, our liberties and freedoms, and parliamentary democracy. They were born of a society in which people participate, not a consumer society. From them ​spring mutual obligations, not merely contractual ones. Mutuality issues from civic virtue of the sort we have seen on our streets in response to calamity and terror in recent months in London and Manchester.

PC Keith Palmer faced lethal force in defence of this place and gave his life for others. I had the privilege of taking part in his funeral at Southwark Cathedral and the streets of south London were lined with serving police officers and members of the public.

Kirsty Boden, a nurse who also moved into danger on the terrible night of 3 June to help those who were injured, in consequence suffered with her life, dying by the doors of our cathedral offices. Police were on the scene, the very first of them unarmed, their instinctive response to tackle the threat regardless of the possibility of lethal harm to themselves. The whole operation was completed in eight minutes.

The firefighters at Grenfell Tower on 14 June went beyond the call of duty to tackle a blaze in which many people perished and which consumed the whole building, together with the homes and possessions of nearly everyone living there. They, too, displayed virtue of an extraordinary kind. So did the people of the parish church of St Clement and St James Notting Dale, who opened up their church and their hearts to care for those made homeless by the conflagration, as did other local churches, with the local community bringing emergency provisions in abundance.

At the Finsbury Park mosque, imam Mohammed Mahmoud led others to intervene to prevent harm to a man subsequently charged with grievous offences in the wake of the attack near the Muslim Welfare House on Seven Sisters Road in the early hours of 19 June.

The question has been raised of whether all our political structures are as capable and resilient as these first responders, members of the public and faith communities in meeting the needs of people in extreme distress. In Kensington and Chelsea, any deficit appears to lie in the values held through to the resources deployed to fulfil them.

“For where your treasure is, there will your heart be also”,

as we are reminded in St Matthew’s Gospel.

The initiative of Her Majesty’s Government, as confirmed by the Minister, to create a commission for countering extremism is welcome and the Church of England is willing to be involved in its work. I note in the briefing that accompanies the gracious Speech that it will,

“support the public sector and civil society in promoting and defending pluralistic values across all our communities”.

One needs to be clearer in defining “pluralistic values”. If we mean a framework that encourages those with differing beliefs and views to live in harmony and mutual respect, that is something bishops will support. If it means that everything is relative and there are no core common values, or that absolute values are discouraged, then I think we have gone too far.

I understand the desire for a review of counterterrorism in the light of recent attacks, but the emphasis may be in the wrong place. The Home Secretary has already acknowledged that we have some of the toughest counterterrorism legislation in the world. That outrages have occurred is not principally a sign that such powers ​are inadequate, but that very ruthless people wish us harm. The answer to this is diligence, the resources to deliver such vigilance and a society resilient enough to face down the threat of hatred that manifests itself in such appalling violence. It needs to be said that hatred leading to violence is a wicked distortion of the image of God, in which every human being is made. Indeed, it is a wicked distortion of any and all religious identity and belief. Contrast that with the many acts of kindness, loving care to neighbour and friendship in past weeks in each local context. A number of churches in my diocese have been invited to the breaking of the fast during Ramadan. Southwark Cathedral hosted one such event following the London Bridge attack.

In conclusion, those services that responded so magnificently to the outrages and calamities of recent weeks need the resources to meet future crises of the moment and the capacity to meet other ongoing demands. Compared to 2010, there have been significant reductions in the funding of fire and emergency planning services. The number of police officers has fallen by more than 20,000 in England and Wales. The Prison Service is now aiming to recruit an additional 2,500 prison officers, but this has to be seen in the context of a previous reduction of more than 6,000 key and experienced staff, which in my diocese, in our five large prisons, has adversely impacted on morale and prison regimes. These services, upon which our well-being and our very lives depend, often operate to the limits of their capacity. We must take responsibility to ensure that they are not pushed beyond the limits of capacity.

Lord Bourne of Aberystwyth: [extract]…Events in the past few weeks have shown that now is indeed a time for us to work together and focus on what unites rather than divides us. Many noble Lords have referred to that. As Minister for Faith, I have had the privilege over the past few weeks to speak to leaders of different faiths from across the country. I have heard and seen first-hand how communities from all sorts of different backgrounds have responded to recent terror incidents, supporting each other in the face of cruel and unspeakable terror. That was referred to by my noble friend Lady Williams, the noble Lord, Lord Kennedy, opposite, the noble Lord, Lord Paddick, for the Liberal Democrats, and the right reverend Prelate the Bishop of Southwark. We have seen selfless acts from countless people. We have seen charities, the voluntary sector and individuals working hard. Others have spoken about the emergency services. The noble Lord, Lord Mackenzie, spoke about the role of the police, but it is true of the other emergency services—the ambulance service and the fire service, certainly, as seen in the context of Grenfell.