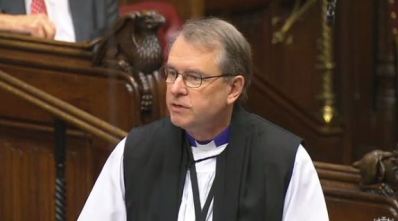 On 26th November 2018 Lord Dubs led a short debate on the motion: ‘To ask Her Majesty’s Government what plans they have to commemorate the 80th anniversary of the decision to allow Kindertransport children to come to the United Kingdom.’ The Bishop of Durham, the Rt Revd Paul Butler, contributed to the debate:

The Lord Bishop of Durham: My Lords, I add my thanks to the noble Lord, Lord Dubs, for securing this debate and for all he does as the living embodiment in this House of the Kindertransport legacy. It was also my privilege to be present at the event at the Friends’ meeting house a couple of weeks ago, which was deeply inspiring.

In 1939, as a 10 year-old refugee, Paul Willer and his family were quietly sponsored to come to the UK by the then leader of the Opposition. The Attlees’ hospitality provokes us to consider both wider community responses to welcoming strangers and government plans. My first question is: what will each of us do in our communities to commemorate the hospitality of those who went before?

When we concern ourselves solely with what the Government should do about asylum and the resettlement of refugees, the focus becomes too narrow. Disproportionate attention is given to questions of affordability and enforcement. They are not where discussion should begin. Any action to welcome and integrate refugees must be a whole society effort, in which the Government play a crucial part, but only one part.

British Future and HOPE not hate’s recent national conversation on immigration gives us a rigorous evidence base for the singular importance of one’s local experience in shaping how we view wider policy questions about integration and immigration. Local consent is crucial. When it comes to doing more for unaccompanied minors, the will, even if sometimes fragile, is there.

This predominant view is well expressed by one participant at the Durham panel of those conversations, who said:

Since September 2015, the charity Home for Good has had 14,000 people register their interest in becoming a foster carer for an unaccompanied asylum-seeking child. Of course, not all will be suitable, but many would. The way that Home for Good works means that behind each name is a person embedded in a series of communities and institutions who would support them.

Meeting community sponsorship groups, I have seen the remarkable depth of skills and assets that groups can leverage to resettle and welcome refugee families. There is then the sheer ingenuity and commitment that foster carers and community sponsors who care for vulnerable children demonstrate daily. The salient question is how, not if, the Government harness and develop the compassion and capacity already there in communities across the UK.​

Finding an answer will require courage,  imagination and collaboration. This is exemplified in the success of the VPRS scheme and in community-based pilots such as that at Yarl’s Wood. In the context of this debate, all three virtues have been in evidence at the Home Office, particularly in the work of Paul Morrison and his directorate, to whom I pay respect. There remain many questions about the current approach to resettlement, asylum and migration, but there is much to cheer.

Working out how the UK can best offer welcome to more of the most vulnerable children in the world will be a complex conversation. As it was 80 years ago, it will be difficult and costly. However, in pushing forward, we will be doing the right thing.

The Church of England—as, I know, do other faith communities—stands ready to work with the Minister to design a scheme to facilitate the expanded welcome and flourishing of these children. Will the Minister commit to a further deepening of engagement with civil society and businesses to create a fully rounded way forward to ensure that we take an increased number of such children? Eighty years on from the Kindertransport, we stand in the legacy that was marked both by local acts and national leadership. It is clear that the only appropriate commemoration is to go and do likewise. It is now our turn.

The Parliamentary Under-Secretary of State, Ministry of Housing, Communities and Local Government and Wales Office (Lord Bourne of Aberystwyth) (Con) [extract].. The right reverend Prelate the Bishop of Durham spoke about the importance of individuals as well as Governments contributing to this area. He spoke about Clement Attlee, quite rightly. I thank him and, through him, many other faith institutions for their sponsorship of individuals coming to this country as refugees. Those numbers are added to the overall numbers; they are not taken out of them, as it were. They are in addition to the numbers provided.

The Lord Bishop of Durham: Forgive me, but can the Minister check his previous answer? The last conversation I had was that these numbers are included in, not additional to, the overall number.

Lord Bourne of Aberystwyth: I am grateful to the right reverend Prelate. That is not the information that I have, but I will certainly check that point.