“Calm scrutiny will cause people with power, whoever and wherever they may be, whatever they may say, however loudly they may speak, one and all, to be uncomfortable. This applies as much to the Bishops of the Church of England as to anyone else”.

On 2nd December 2021 the Bishop of Liverpool, Rt Revd Paul Bayes, made his maiden speech in the House of Lords, during a debate led by Lord Bragg “That this House takes note of the BBC’s value to the United Kingdom and a wider global audience and the case for Her Majesty’s Government giving it greater support.”

The Lord Bishop of Liverpool (Maiden Speech): My Lords, I am grateful for the opportunity to address your Lordships for the first time and on this subject, and for the privilege of following the noble Lord, Lord Bilimoria. I am grateful to the noble Lord, Lord McNally, for his kind words*. I thank all noble Lords for the warmth of the welcome that I have received, and, for the quality of briefing and induction from the officers and staff of your Lordships’ House, which has been exemplary and profoundly helpful.

I speak as one whose first degree was in drama and theatre arts, and who was almost employed by the BBC as a trainee script editor in what was then called “English Regions Drama”, at the Pebble Mill studios in Birmingham, in 1975. With whatever wisdom, I chose instead to enter the ordained ministry of the Church, and there have been times when I have felt that I chose the lower calling. Forty-two years of ministry in six different dioceses have culminated in the enormous privilege of my being appointed Bishop of Liverpool in 2014. I have been preferred to your Lordships’ House late in my ministry, but I am very grateful to be here and to receive wisdom for at least a few months.

Among its many dimensions, I want to speak of what the BBC does uniquely in our fragmented public square. To me, the gift and value of public service broadcasting is a matter of form before it is a matter of content: it rests on the decision to assume a tone of voice. The value of the BBC to this nation and our global position is rooted in its decision to be calm, to choose a particular volume and quality of scrutiny and to sustain it, no matter how unpopular it may be.

END_OF_DOCUMENT_TOKEN_TO_BE_REPLACED

On 5th March 2020 the House of Lords debated a motion from Lord Young of Norwood Green, “That this House takes note of the role of the BBC and public service broadcasting in the United Kingdom’s economy and creative culture.” The Bishop of Salisbury, Rt Revd Nicholas Holtam, spoke in the debate: 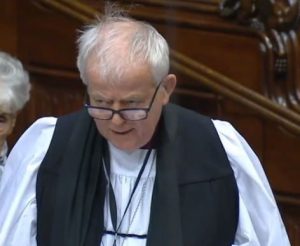 The Lord Bishop of Salisbury: My Lords, the timing of this debate could hardly be better. I also want to thank the noble Lord, Lord Young, for his introduction. The Media and Telecoms 2020 & Beyond conference and the Culture Secretary’s contribution to it inevitably inform a lot of what is to be said. I also wondered whether I need to declare an interest, having been the vicar of St Martin-in-the-Fields for 16 years, given that the first religious service ever broadcast came from there, by the BBC, in January 1924. The link continues. I never made much income from it, but it is a significant relationship with considerable affection for the BBC built into it. END_OF_DOCUMENT_TOKEN_TO_BE_REPLACED

On 12th October 2016 the House of Lords debated a Government motion “that this House takes note of the drafts of the BBC’s new charter and the agreement between the Secretary of State for Culture, Media and Sport and the Corporation.” The Bishop of Norwich, Rt Revd Graham James, spoke in the debate about the need for well-resourced and informed coverage of religion. 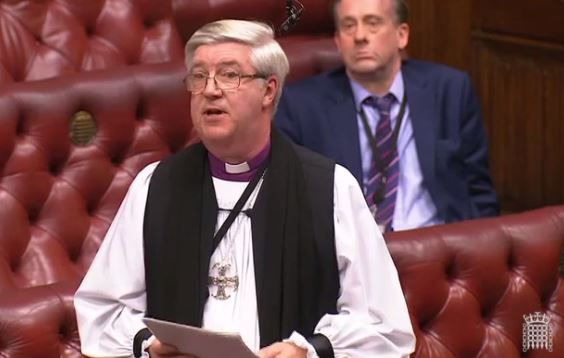 The Lord Bishop of Norwich: My Lords, I have been pondering what interest to declare in this debate. I have never been employed by the BBC, but have received very modest remuneration for occasional broadcasts; I listen to Radio 4 more than any other channel; I fall asleep when watching “Newsnight”, despite my best intentions; and I belong to a generation for whom, in our childhood and early life, television and radio were the BBC—in my native Cornwall in the late 1950s, there was no ITV. I say all this because I realise that the BBC is so much part of the fabric of my life that I can be an incurable romantic about it.

In some ways, the BBC is rather like the Church of England: it is both national and local, and everyone in the BBC, as in the Church of England, imagines that power is being exercised somewhere but they always believe that it is somewhere else and that they do not have any. END_OF_DOCUMENT_TOKEN_TO_BE_REPLACED

On 19th July 2016 Lord Stevenson of Balmacara asked Her Majesty’s Government “to what form of parliamentary scrutiny they intend to submit the draft Royal Charter of the BBC.” The Bishop of Southwark, Rt Revd Christopher Chessun, asked a follow up question:

The Lord Bishop of Southwark: My Lords, does the Minister agree that the building of religious literacy and the understanding of diverse communities within our nation should be a foundational part of the statutory duty of the BBC, mindful of the need for global and domestic cohesion? END_OF_DOCUMENT_TOKEN_TO_BE_REPLACED

On 21st April 2016 the House of Lords debated a motion from Lord Best, Chair of the Lords Communications Committee, “That this House takes note of the report from the Communications Committee BBC Charter Review: Reith not Revolution (1st Report, HL Paper 96).” The Bishop of Chelmsford, Rt Revd Stephen Cottrell, who is a member of the Committee spoke in the debate: 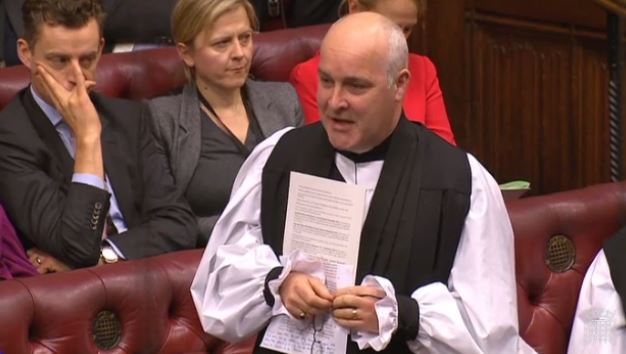 The Lord Bishop of Chelmsford: My Lords, I too speak as a member of the Select Committee that produced this report. I must declare an interest as a co-chair of the multi-faith standing conference of the BBC on religion and ethics, and related to that work I want to talk about the place of faith in public service broadcasting, and indeed to speak for all the faith communities in these islands.

It has been said that if a mission statement is more than two or three words long, it either means that the organisation does not really know its purpose, or even if it does, no one else will. Let me give a few examples: glasnost, girl power, flower power, New Labour and the big society; I will not go on. Consequently, if a mission statement is going to work, it has to be pithy and memorable. Lord Reith’s “inform, educate and entertain” does the job, and has done it very effectively for a long time—everyone knows it.When the last charter renewal process landed the BBC with six rather wordy and worthy public purposes, it was not necessarily doing it a favour. END_OF_DOCUMENT_TOKEN_TO_BE_REPLACED

On the 10th March 2016 the Bishop of Leeds, Rt Revd Nick Baines, spoke in a short debate on the BBC Charter Review. He expanded on these remarks in a subsequent blog post.

The Lord Bishop of Leeds: My Lords, the BBC has three core purposes: to inform, to educate and to entertain. Will the Minister comment on a fourth purpose, which is to interpret? Diversity has been perceived in terms of regional diversity when one could also say that ethnic and religious diversity in the country need to be taken more seriously. Religion is a primary motivator of individuals and communities, inspiring and informing their political, economic, ethical and social behaviour.

“The BBC has plenty of the faults to be found in all large institutions, including government departments. It has a capacity to waste money on IT projects, but no more so than successive Governments. It can be complacent and bureaucratic, but so can the Church of England and the trade unions. What seems to irritate its opponents is its very success.” – Bishop of Norwich, 14/7/15

The Lord Bishop of Norwich: My Lords, it seems odd that a Government so keen to promote British values in our schools appear intent on reducing the capacity of a world-renowned British institution. The BBC is increasingly referred to as though it were part of the public sector. It is not. It is an organisation financed not from the public purse but by those who use it. The fact that many of them are also taxpayers is no more relevant than the fact that those who pay their energy bills are also taxpayers. Perhaps the winter fuel allowance will now be transferred to the energy companies. The logic seems impeccable given the precedent established last week.

END_OF_DOCUMENT_TOKEN_TO_BE_REPLACED

On 3rd June 2015, during the debate on the Queen’s Speech, the Bishop of Norwich, the Rt Revd Graham James, spoke on the social and cultural aspects of education, as well as those of broadcast media. The text of his speech is below and can be watched online here:

The Lord Bishop of Norwich: My Lords, the gracious Speech said that the Government intend,

I declare an interest as one of the sponsors of the first academy in Norfolk, the Open Academy, set up under the last Labour Government. It is now part of a thriving diocesan academies trust committed to school improvement. So I support the Government’s overall aim to improve schools, but there are areas where the direction of travel needs a few extra signposts. END_OF_DOCUMENT_TOKEN_TO_BE_REPLACED