Skip to content
On the 23 May 2019 the Bishop of Coventry, the Rt Revd Christopher Cocksworth, received three written answers from Government to questions he had asked on (i) children in Iraq, (ii) terrorism in Sri Lanka and (iii) religious freedom in Pakistan.

The Lord Bishop of Coventry: To ask Her Majesty’s Government what assessment they have made of reports that some 45,000 children in Iraqi displacement camps are without civil ID documentation; and what representations they intend to make to the government of Iraq to ensure that those children are not excluded from Iraqi citizenship and society in the future. HL15663 END_OF_DOCUMENT_TOKEN_TO_BE_REPLACED

On 11th January 2018 the Bishop of Coventry, Rt Revd Christopher Cocksworth, led a debate in the House of Lords on the question: “to ask Her Majesty’s Government what is their post-conflict strategy for protecting the rights of religious and ethnic minorities in Iraq.” His speech is reproduced in full below, as is that of the Government minister responding. All speeches by those taking part in the debate can be read here.

The Lord Bishop of Coventry: My Lords, imagine what it was like, having been hounded out of one’s home when Daesh took control of Mosul, to be back there on Christmas Eve among 2,000 worshippers for the first celebration of the Mass in three and a half years. But then imagine the scene only hours afterwards— ​not only the church but also the city again almost entirely bereft of Christians because it is still not safe enough for them to return permanently.

What can be done to give Christians, Yazidis, Turkmen, Sabeans, Yarsanis, Shabaks and other vulnerable religious and ethnic communities in Iraq confidence that they have a future in their own land—and why is it vital for that land and that region that their confidence is regained? END_OF_DOCUMENT_TOKEN_TO_BE_REPLACED

On 23rd November 2017 the House of Lords debated a motion from Lord Soley, “That this House takes note of the case for maintaining United Kingdom defence forces at a sufficient level to contribute to global peace, stability and security.” The Bishop of Coventry, Rt Revd Christopher Cocksworth, spoke in the debate:

The Lord Bishop of Coventry: My Lords, I join others in commending the noble Lord, Lord Soley, for securing this debate and for framing it in this way. He made it clear that UK defence forces exist not only for the protection and promotion of immediate British interests but to contribute to global peace, stability and security. The scale of that task has obvious implications for the size of the defence budget and its distribution. END_OF_DOCUMENT_TOKEN_TO_BE_REPLACED

On 24th October 2017, the Minister of State at the Foreign and Commonwealth Office, Lord Ahmad of Wimbledon, repeated a Government statement on the liberation of Raqqa. The Bishop of Salisbury, Rt Revd Nicholas Holtam, asked a follow up question:

The Lord Bishop of Salisbury: My Lords, I thank the Minister for his statement and point out that the Christian presence in Iraq is integral to that country’s cultural identity. A reconstruction committee composed of Chaldean, Syriac and Syriac Orthodox churches has restored over 1,700 properties, but that will restore fewer than a quarter of internationally displaced people. What can the Government do to help those displaced Christians to return safely to that space, like Jonah returning to Nineveh, a place where they belong and are called? How can the Government support them in that process where there is a real threat in terms of faith? END_OF_DOCUMENT_TOKEN_TO_BE_REPLACED

On 11th and 12th October 2017 Rt Revd Christopher Cocksworth, Bishop of Coventry, received written answers from the Government to questions about civilian casualties and the financial cost of armed conflict in Iraq: 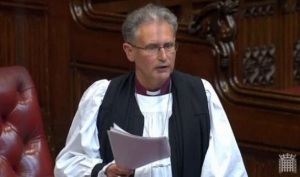 END_OF_DOCUMENT_TOKEN_TO_BE_REPLACED

On 25th July 2017 the Bishop of Southwark, Rt Revd Christopher Chessun, received written answers to two questions of Government about protecting Christians in Iraq and Syria.

The Lord Bishop of Southwark: To ask Her Majesty’s Government what steps they are taking in Iraq and Syria to discharge the responsibility set out by Mark Field MP, Minister of State at the Foreign and Commonwealth Office, on 4 July (HC Deb Col. 21WH) for “protecting and upholding the rights of Christian communities across the globe.” END_OF_DOCUMENT_TOKEN_TO_BE_REPLACED

On the 17th and 18th July 2017, the Bishop of Southwark, Rt Revd Christopher Chessun, received written answers to questions about Iraqi refugees fleeing Daesh and who are eligible for ressetlement under the Syrian Vulnerable Persons Resettlement Scheme.

Bishop of Southwark: To ask Her Majesty’s Government, what estimate they have made of the number of Iraqis that have fled Daesh in Iraq who are now refugees in countries bordering Syria. [HL704]

END_OF_DOCUMENT_TOKEN_TO_BE_REPLACED 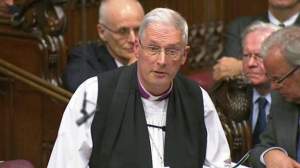 The Lord Bishop of Southwark to ask Her Majesty’s Government how many Iraqi refugees they have resettled since 2014 under (1) the Vulnerable Children’s Resettlement Scheme (VCRS), and (2) other global resettlement schemes such as Gateway and Mandate. END_OF_DOCUMENT_TOKEN_TO_BE_REPLACED

On 12th July 2017 the Secretary of State for International Development, Rt Hon Priri Patel MP, made a statement to the House of Commons about the humanitarian situation in Mosul, Iraq. The Second Church Estates Commissioner, Rt Hon Dame Caroline Spelman MP, asked a follow up question:

Dame Caroline Spelman (Meriden) (Con): Mosul was home to one of the oldest Christian communities in the region, but religious minorities suffered dreadfully at the hands of ISIS. What can DFID do to ensure that such minorities are able to return to their place of origin? END_OF_DOCUMENT_TOKEN_TO_BE_REPLACED

On 27th June 2017, the Bishop of Southwark, the Rt Revd Christopher Chessun, received a written answer to a question on the UK Syrian Vulnerable Persons Scheme.

The Lord Bishop of Southwark: To ask Her Majesty’s Government, what steps they are taking to expand the UK Syrian Vulnerable Persons scheme to include Iraqi refugees in Jordan. [HL154] END_OF_DOCUMENT_TOKEN_TO_BE_REPLACED