“It seems to me that the connection between housing and a lower reoffending rate is clear and it would be in the interests of government, society and prisoners if we could maximise the enabling of people leaving prison to be housed, giving stability of place and of relationship” – The Bishop of Derby 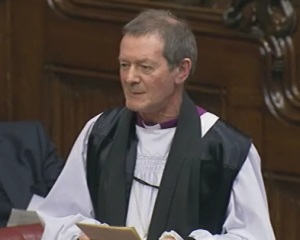 On 5th December 2013, the Bishop of Derby took part in a debate on the what assessment the Government have made of the impact on reoffending rates of providing stable accommodation for those leaving prison.

The Lord Bishop of Derby: My Lords, I, too, congratulate the noble Baroness, Lady Rendell, on securing this debate. I begin with a local perspective. I work in the city of Derby, and this time last year I organised the Redfern Commission, which brought people together to look at how citizens can help each other improve and develop the quality of life as the welfare state begins to recede. One of the sessions we had was about the police and the probation services. Some of the local statistics develop some of the insights already offered. Offenders, we were told, were more likely to have been in care, be unemployed, have been a truant, have family members convicted of crime, have writing and numeracy skills below that of an 11 year-old, be a drug user or have two or more mental disorders. That is a very complex set of issues for any person to deal with. The key thing for somebody like that is stability, and accommodation is at the root of stability of place and stability of relationship.

We were told that locally 60% of short-term prisoners and 50% of all prisoners reoffended, but only 35% of those who did community service did. That again says something about stability, relationships and putting the person in a bigger context than just being left to their own devices. In Derby, there is an organisation I am proud to be associated with called Derventio. It works with the homeless, especially ex-offenders. I want to read from a letter from a young woman who has been helped by this organisation. She wrote:

“You know about my difficult relationships and the domestic violence that led me to self-harm. You know that I was often in prison and didn’t care but I’d like you to know that the opportunity of accommodation has been a godsend”.

She goes on to say that she now feels secure and hopeful and she ends the letter saying:

“I want my life to improve”.

The stability in place and relationships has given her the confidence and the extra resource to begin to overcome that complex of handicap.

I want to name four or five issues that the Minister might like to comment on as we look at this issue in more detail. How do we get better liaison between those giving housing advice in prison and those who organise local government housing allocation? How do we get a better dialogue and joined-up thinking, not least with all the different policies that local authorities have? In my experience, and I visit a couple of prisons locally, too many prisoners lack information and too many people who might try to help them on the outside do not really know the extent of prisoners’ vulnerability and the problems they face. I echo the comments from the noble Baroness, Lady Linklater, about how that is going to be delivered with the changes in the probation service. How are we going to assess prisoners’ vulnerability better and how are we give them better advice when in prison and as they come out about housing?

As we know, benefits are stopped when somebody is in prison. Would it not be much better to suspend them? In the crucial time after somebody leaves prison, having to get re-established to claim benefits means that without support, particularly with accommodation, they are susceptible to falling into bad ways. There could also be much better training in prison about the management of money and the responsibilities of being a tenant. These are basic things that, in my experience, people are not up to speed with. Prisoners often have no deposit to enter the private rental sector which, as we have heard, may be one of the few places open to them. Could there be a targeted grant scheme with a negotiation about who would receive the grant and what they would give in return? Quite frankly, that small investment would be much better than the colossal expenditure if people reoffend and go back into the system.

Some local churches offer support to some of the prisoners I meet when I visit. It reminds me that we need to be more proactive in linking with agencies with expertise in housing and accommodation. It seems to me that the connection between housing and a lower reoffending rate is clear and it would be in the interests of government, society and prisoners if we could maximise the enabling of people leaving prison to be housed, giving stability of place and of relationship.