On 5th February 2019 Rt Revd Christopher Lowson, Bishop of Lincoln, responded to a Government Statement about the Nissan Car Factory in Sunderland, on behalf of the Bishop of Durham:

The Lord Bishop of Lincoln: My Lords, I have been asked by my right reverend friend the Bishop of Durham, who is detained in his diocese, to ask the following question. While he recognises the promised protection of existing jobs, does the Minister recognise that Nissan’s X-Trail announcement will inevitably cause real worry for existing staff about the sustainability of their jobs, both at Nissan and in the supply chain?

Will the Minister say how Her Majesty’s Government intend to allay such concerns at local level and what they might do to encourage Nissan to invest more in the development of electric cars and autonomous vehicles?

END_OF_DOCUMENT_TOKEN_TO_BE_REPLACED

On 4th February 2019 Baroness Wheeler asked the Government “how they will ensure that there are sufficient nurses, doctors and community specialist care staff to deliver the National Health Service long-term plan, published on 7 January 2019.” The Bishop of Lincoln, Rt Revd Christopher Lowson, asked a follow-up question:

The Lord Bishop of Lincoln: Is the Minister aware that we have recently opened a new medical school in the University of Lincoln? We hope that this will assist the recruitment and retention of more doctors. However, what are the Government doing to mitigate the increased cost of specialist community nursing provision in remote and sparsely populated rural areas? END_OF_DOCUMENT_TOKEN_TO_BE_REPLACED

On 14th January 2019 the House of Lords voted to pass a ‘Motion to Regret’ the Government’s EU Withdrawal Agreement, tabled by the Leader of the Opposition Baroness Smith of Basildon. Five bishops voted, and whilst the Archbishop of Canterbury attended and spoke in the debate, he abstained in the vote.

Baroness Smith of Basildon moved ‘That this House, while noting that it is for the House of Commons to determine the matter, considers that a no deal outcome to negotiations under Article 50(2) of the Treaty on European Union must be emphatically rejected, and regrets that withdrawal from the European Union on the terms set out in the Withdrawal Agreement and Political Declaration laid before Parliament would damage the future economic prosperity, internal security and global influence of the United Kingdom.

END_OF_DOCUMENT_TOKEN_TO_BE_REPLACED

On 14th January 2019 the House of Lords debated the Government’s EU Withdrawal Agreement and Political Declaration. The Bishop of Lincoln, Rt Revd Christopher Lowson, spoke in the debate. His full speech is below: 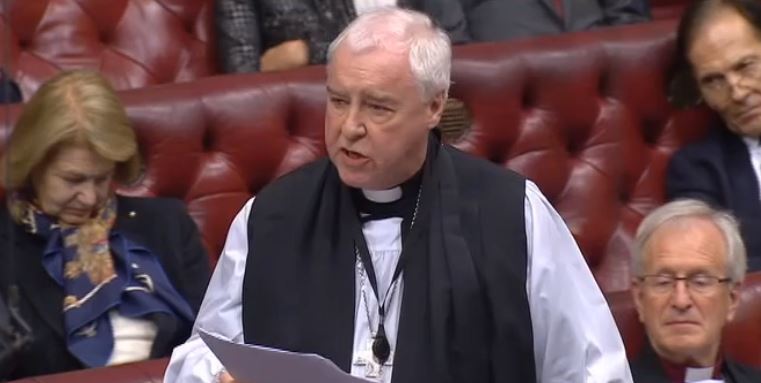 The Lord Bishop of Lincoln: My Lords, I am honoured to speak after the noble Baroness—honoured and a little daunted. This is the first time I have spoken on this issue. I therefore want to say something about my context of Lincoln and then consider what a Bishop might usefully add to this debate.

As your Lordships know, Lincolnshire is one of the parts of the United Kingdom that voted most emphatically in favour of the UK’s withdrawal from the EU, with 66% voting to leave. I have thought hard about why that should be the case. There are the obvious reasons—the tip of the iceberg, if you like. Nationally, these would be described in terms of sovereignty and immigration.

END_OF_DOCUMENT_TOKEN_TO_BE_REPLACED

On 17th December 2018 the House of Lords voted to pass an Opposition amendment to the Government’s Counter-Terrorism and Border Security Bill. The Bishop of Lincoln took part and voted for the amendment. END_OF_DOCUMENT_TOKEN_TO_BE_REPLACED

On 20th June 2018 a Government statement about the Gosport Independent panel, chaired by the former Bishop of Liverpool, was repeated in the House of Lords. The Bishops of Lincoln and Coventry spoke after the statement to ask questions of the Minister. Their exchanges are below:

The Lord Bishop of Lincoln: My Lords, I declare an interest as my wife is a lead clinician in the office of the Parliamentary and Health Service Ombudsman. My friend the right reverend Prelate the Bishop of Portsmouth cannot be in his place today as he is in his cathedral church with the families of those whose loved ones were patients at Gosport War Memorial Hospital, as they properly received the report prior to it being laid before Parliament. On his behalf, and sharing his profound concern and with some anger as a vicar and archdeacon in that area at that time, I politely remind the Minister of the evidence of disregard for human life, a culture of deliberately shortening life, and a regime of systematic overuse of opioids and of the way in which those raising concerns were treated as troublemakers. END_OF_DOCUMENT_TOKEN_TO_BE_REPLACED