On 21st June 2022 the House of Lords debated the Abortion (Northern Ireland) Regulations 2022, alongside a motion from Baroness O’Loan ‘that this House regrets that the Regulations (1) disregard the statutory role of the Northern Ireland Assembly and ignore the devolution settlement, and (2) make substantial constitutional changes via secondary legislation’. The Bishop of Blackburn spoke and voted in favour of Baroness O’Loan’s motion. At the end of the debate the Regulations were approved by the House and the motion was rejected by 28 to 181 votes.

The Lord Bishop of Blackburn: My Lords, I am conscious that it is not commonplace for Prelates to comment on matters that extend to Northern Ireland only. However, what made me reluctant to speak on this matter is the same driving force that has brought me to speak—the fact that this was, and should be again, a devolved matter. My desire and aim today is not to speak around the rights and wrongs of the matter but to state my discomfort that this debate is happening in this place at all.

END_OF_DOCUMENT_TOKEN_TO_BE_REPLACED

On 9th November 2020 the House of Lords debated and voted on the Government’s UK Internal Market Bill during its Committee stage. A cross-party group of Peers had tabled motions that all the clauses of Part 5 of the Bill, which covered Northern Ireland, international law, and executive powers,  should not remain in the Bill. These successfully passed by large majorities across two votes. The Bishop of Leeds acted as a sponsor of two of those motions, and spoke in the debate on whether the clauses of Part 5 should ‘stand part’ of the Bill: 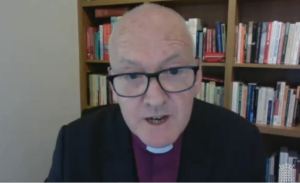 The Lord Bishop of Leeds [V]: My Lords, it is a great pleasure to follow the speech by the noble Baroness, Lady Suttie. I endorse completely the points made by the noble and learned Lord, Lord Judge, at the outset of this debate. I hope the Government will listen carefully to the advice from the noble Lord, Lord Empey, on the alternatives to what is before us. This is not an either/or situation.​

I have read every word of the Second Reading and Committee debates and the reports—especially from the Constitution Committee. I have even reread Tom Bingham’s book on the rule of law. I ask myself whether I am missing something, but I still come back to the point of principle. I accept the Government’s intention in this Bill, but not the means. END_OF_DOCUMENT_TOKEN_TO_BE_REPLACED

On 9th November 2020 the House of Lords debated and voted on the Government’s UK Internal Market Bill during its Committee stage. A cross-party group of Peers had tabled motions that all the clauses of Part 5 of the Bill, which covered Northern Ireland, international law, and executive powers,  should not remain in the Bill. These successfully passed by large majorities across two votes.

The Archbishop of Canterbury had also sponsored an amendment with Lord Eames that Ministers report on the effect of the Bill’s provisions on peace and reconciliation in Northern Ireland, which he spoke to during the debate:

The Archbishop of Canterbury [V]: My Lords, I will speak to Amendment 161*, to which I have added my name, alongside the noble and right reverend Lord, Lord Eames, the noble Lord, Lord Hain, and the noble Baroness, Lady Ritchie of Downpatrick. The previous speeches have all been both moving and deeply eloquent, and I shall therefore be very brief.

As the noble and right reverend Lord, Lord Eames, so powerfully explained, the purpose of our amendment is simply to put on the record a concern that this Bill in its current form fails to take into account the sensitivities and complexities of Northern Ireland, and could have unintended and serious consequences for peace and reconciliation. The noble and right reverend Lord spent 20 years as Archbishop of Armagh, between 1986 and 2006, and the force of his words was most remarkable. He has experience of everything from the funerals in small churchyards of those caught up in the Troubles through to negotiations behind the scenes for the Belfast agreement. He speaks with the integrity and authority that those 20 years have earned him, and I trust that the House will listen carefully. END_OF_DOCUMENT_TOKEN_TO_BE_REPLACED

On 19th and 20th October the House of Lords considered the Government’s UK Internal Market Bill at its Second Reading. The Bishop of Leeds spoke in the debate: 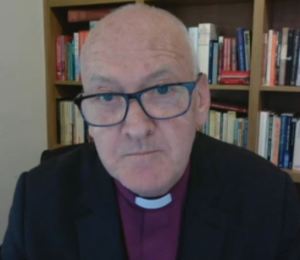 The Lord Bishop of Leeds [V]: My Lords, I add my congratulations to the noble Baroness, Lady Hayman of Ullock, and look forward to her future contributions to this House. I fully endorse the arguments set out by the noble and learned Lord, Lord Judge. I concur with the concerns set out in the report cited by other noble Lords earlier. I even welcome the commitments articulated by the Minister, but I question how they can be trusted, given the underlying ethic of the Bill—and it is absolutely right for archbishops to ask questions of such matters.

Relations with potential partners usually depend on integrity. Trade, security, migration and so on all rest on fundamental trust. Trust cannot be one-sided, or it is not trust at all. Respecting one’s interlocutors is essential. This is inevitably evidenced in language. The Bill before us assumes that our interlocutors cannot be trusted and will behave in bad faith, and that we need to be protected from them. If they do not give us what we demand, we are free to do our own thing, including breaking the law and reneging on agreements made less than a year ago that were said at the time to be “oven ready”—a good arrangement that required “no more negotiations”. What the Bill does not ask is why our word should be trusted by others. END_OF_DOCUMENT_TOKEN_TO_BE_REPLACED

On 15th September 2020 Lord Lexden asked the Government “what role the Law Officers have in ensuring that the rule of law is maintained in (1) the development of domestic legislation and (2) their policies relating to the United Kingdom’s withdrawal from and future relationship with the European Union.” The Bishop of Carlisle, Rt Revd James Newcome, asked a follow-up question: 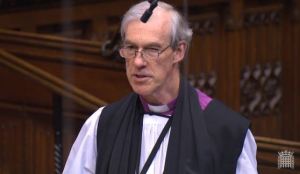 The Lord Bishop of Carlisle: My Lords, can the Minister confirm that the Government recognise that any attempt unilaterally to modify the terms of the withdrawal agreement would adversely affect not only future trade partners but also the confidence that EU citizens resident in this country will place in the commitments that the United Kingdom has made under the agreement? The confidence of British citizens resident in EU countries would also be damaged if they saw that treaty commitments could simply be set aside. Can he offer any reassurance in either regard? END_OF_DOCUMENT_TOKEN_TO_BE_REPLACED

On 8th September 2020 in the House of Lords Government Minister Lord True responded to a question from the Opposition frontbench on the prospects for a Brexit trade deal in October, and the upholding of the Northern Ireland protocol in the withdrawal agreement should a deal not be agreed. The Bishop of Southwark, Rt Revd Christopher Chessun, asked a follow up question:

The Lord Bishop of Southwark: My Lords, given the concerns in the House about any attempt to derogate from an international treaty and the implications for the peace process in Northern Ireland, will the Minister confirm that the Government are aware that any attempt unilaterally to modify the terms of the withdrawal agreement will adversely affect the confidence of EU citizens resident here, and of British citizens resident in EU countries, in the United Kingdom’s commitments under the agreement, if treaty commitments may be set aside?

What can the Minister say to reassure both categories under these circumstances, other than to undertake to honour the treaty in full? END_OF_DOCUMENT_TOKEN_TO_BE_REPLACED

On 15th June 2020 two votes took place on the Government’s Abortion (Northern Ireland) Regulations. Eight bishops took part across both Divisions of the House. The debate can be read here.

END_OF_DOCUMENT_TOKEN_TO_BE_REPLACED

On 15th June the House of Lords debated the Government’s “Abortion (Northern Ireland) (No. 2) Regulations 2020”. The Rt Revd James Newcome, Bishop of Carlisle, spoke in support of an amendment to negative the Regulations, highlighting its effects on abortion on grounds of disability. In two subsequent votes, he and other bishops voted against, but the House of Lords passed the Regulations without amendment by large majorities.

The Lord Bishop of Carlisle: My Lords, I support the amendment from the noble Baroness, Lady O’Loan, and will focus on the proposal in Regulation 7 that abortion for disabilities including Down’s syndrome should be available during the first 12 weeks without question or counselling and then potentially through to birth.​

END_OF_DOCUMENT_TOKEN_TO_BE_REPLACED 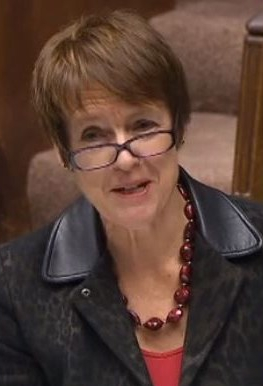 Gregory Campbell (DUP): 278399 To ask the right hon. Member for Meriden, representing the Church Commissioners, what steps the Church of England is taking to tackle problem gambling.

END_OF_DOCUMENT_TOKEN_TO_BE_REPLACED

On 15th July 2019 the Bishop of Newcastle moved an amendment on behalf of the Bishop of St Albans, to the Northern Ireland (Executive Formation) Bill: “(f) delivering regulatory alignment between Northern Ireland and the rest of the United Kingdom in regard to gambling”. The amendment was accepted by Government and agreed by the House without a vote.

The Lord Bishop of Newcastle: My Lords, my friend the right reverend Prelate the Bishop of St Albans has been unavoidably detained in his diocese, so has asked me to speak to his amendment. This is a probing amendment attempting to address an issue that causes regulatory anomalies, in that Northern Ireland does not have the same standards for gambling as Great Britain. This amendment is an opportunity for the Government to enable greater harmony in gambling regulation and legislation. The existing lack of alignment has appeared piecemeal in nature since the Northern Ireland Act 1998, and has led to confusing quirks. For brevity’s sake, I will quickly outline the differences the right reverend Prelate the Bishop of St Albans has identified as being of difficulty to the people of Northern Ireland, who do not have a well-regulated gambling industry with safeguards for all.

Northern Ireland does not use the Gambling Act 2005. Instead, it relies on the Betting, Gaming, Lotteries and Amusements (Northern Ireland) Order 1985. The right reverend Prelate the Bishop of St Albans has suggested that this outmoded basis for a modern gambling industry has led to a lack of safeguards. As the Department for Communities writes on its website, one in 50 Northern Irish adults has a gambling-related problem, which is,

“three times higher than in GB”.​