On 13th July 2017, the Bishop of Coventry, Rt Revd Christopher Cocksworth, received a written answer to a question about the Central African Republic:

The Lord Bishop of Coventry: To ask Her Majesty’s Government what assessment they have made of the peace accord between the government of the Central African Republic and 13 armed groups, signed in Rome on 19 June. END_OF_DOCUMENT_TOKEN_TO_BE_REPLACED

On 4th November 2014, Lord McConnell of Glenscorrodale asked Her Majesty’s Government what support they will provide to the United Nations mission in the Central African Republic. The Bishop of Norwich, the Rt Revd Graham James, asked a supplementary question: 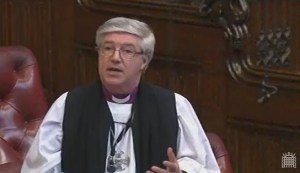 The Lord Bishop of Norwich: My Lords, given the widespread violation of both women and children in this tragic conflict, will the Minister indicate whether there are ways in which the Government could extend the success of the Preventing Sexual Violence in Conflict Initiative to the Central African Republic?

Baroness Anelay of St Johns: The right reverend Prelate makes a very important point. The work done by my noble friends in the Foreign Office and DfID this summer is bearing good results but we need to be able to take those further forward. I listened to what he said and I will certainly take his views back to the FCO.

On 6th May 2014, the Rt Revd John Inge, Bishop of Worcester, recieved answers to two written questions on the Central African Republic.

The Lord Bishop of Worcester: To ask Her Majesty’s Government what assessment they have made of the extent to which sexual violence has been used by all parties to the conflict in the Central African Republic.

Lord Wallace of Saltaire: Reports suggest that sexual violence in conflict is widespread in the Central African Republic (CAR). UN Security Council Resolution 2149 on CAR authorises a UN Peacekeeping Operation which will, as part of its mandate, be required to help to prevent sexual violence, and contribute to efforts to identify and prosecute perpetrators. The UK is also looking to provide funding to the African Union (AU)’s response to the urgent needs of CAR’s victims of sexual violence, and to track and report on specific occurrences of sexual violence. We encourage CAR to endorse the Declaration of Commitment to End Sexual Violence in Conflict and to attend the Global Summit to End Sexual Violence in Conflict, in London in June 2014.

END_OF_DOCUMENT_TOKEN_TO_BE_REPLACED

Updated: The Archbishop of Canterbury asked three written questions of Government, on conflict in the Central African Republic and on sexual violence and war crimes in South Sudan. They were responded to on 10th and 11th March 2014 by the Foreign Office Senior Minister of State, Baroness Warsi.  The questions and their replies are below.

The Archbishop of Canterbury: To ask Her Majesty’s Government what steps they are taking to support the stabilisation of the conflict in the Central African Republic, particularly in ensuring that sectarian violence does not develop into inter-religious conflict.

The Senior Minister of State, Department for Communities and Local Government & Foreign and Commonwealth Office (Baroness Warsi) (Con): We are greatly concerned by the situation on the ground in the Central African Republic (CAR). The UK provided £15 million to the humanitarian appeal and a further £2million to the African Union to cover some of the African-led International Support Mission to CAR (MISCA)’s operation. END_OF_DOCUMENT_TOKEN_TO_BE_REPLACED

On 16th January 2014, Baroness Berridge asked Her Majesty’s Government what is their response to the failure of the transition government and the growing crisis in the Central African Republic.

The Most Revd and Rt Hon John Sentamu, Archbishop of York, asked a supplementary question:

The Archbishop of York: My Lords, does the Minister agree that the scale of the crisis is very large? I am grateful for what the Government are doing in response to this particular crisis, but will they use their offices in the European Union to make sure that all nations take part in dealing with this rather appalling situation? I am not confident that the African Union actually has the capacity to deal with the situation, much as it is on the ground. I hope the Minister can give us some comfort by confirming that the Government are talking to our European allies to ensure that whatever is needed is provided. Otherwise, we will end up with genocide and pictures on our television screens that will make all our stomachs churn day by day.

END_OF_DOCUMENT_TOKEN_TO_BE_REPLACED

“It is not surprising that the violence and insecurity that now plagues this country has hampered the delivery of humanitarian aid. As a result, local faith groups and a few national and international NGOs are the primary responders” – Bishop of Wakefield, 18.11.13

On 18th November 2013, Conservative Peer Baroness Berridge led a short debate to ask Her Majesty’s Government what assessment they have made of the security and humanitarian situation in the Central African Republic and the Great Lakes region of Africa. The Bishop of Wakefield, the Rt Revd Stephen Platten, took part in the debate, focusing his remarks on the need to sanction the perpetrators of violence in the Central African Republic and the urgent need to tackle sexual violence in conflict.

The Lord Bishop of Wakefield: My Lords, I warmly congratulate the noble Baroness, Lady Berridge, for securing this debate and for introducing it with such clarity of purpose. Those of us of a certain age will remember graphically the tragedy of the Congo, going all the way back to independence itself. This was followed by the Katanga breakaway movement and the instability there, and the subsequent tragedies made the entire Great Lakes region a terrible, open wound on our common humanity. As we know, that conflict, which began all those years ago, continues in a number of countries. END_OF_DOCUMENT_TOKEN_TO_BE_REPLACED