The Bishop of St Albans asked a question regarding Russia’s invasion of Ukraine on 4th April 2022:

The Lord Bishop of St Albans: To ask Her Majesty’s Government what steps they are taking to work with international partners to investigate allegations of war crimes following the massacre in Bucha, Ukraine, by Russian Armed Forces.

Lord Ahmad of Wimbledon (Con): My Lords, we were all horrified, as we are now, by seeing evidence of appalling acts by Russian forces in the Ukrainian city of Bucha. Russia’s alleged indiscriminate attacks against civilians during this illegal invasion must be investigated as war crimes. We will fully support any investigations by the International Criminal Court, and we will not rest until those responsible for these atrocities have faced justice. The international community must continue to provide Ukraine with humanitarian and military support while stepping up sanctions to cut off funding for Mr Putin’s war machine.

END_OF_DOCUMENT_TOKEN_TO_BE_REPLACED

The Bishop of Southwark: To ask Her Majesty’s Government what assessment they have made of the statement by Patriarch Abuna Mathias in April (1) that the government of Ethiopia and its allies are committing genocide in Tigray, and (2) that rape is being used as a weapon of war in that region.

END_OF_DOCUMENT_TOKEN_TO_BE_REPLACED

On 3rd November 2020 the Bishop of St Albans received a written answer to a question on the behaviour of the Azerbaijan military in Nagorno Karabakh:

The Lord Bishop of St Albans: To ask Her Majesty’s Government what assessment they have made of the validity of footage showing Azerbaijan Military personnel executing two Armenian prisoners of war; and whether this constitutes a violation of the Geneva Convention. [HL9582] END_OF_DOCUMENT_TOKEN_TO_BE_REPLACED

On 26th October 2020 the Bishop of St Albans received a written answer to a question on alleged war crimes by the Syrian National Army.

Lord Bishop of St Albans: To ask Her Majesty’s Government, further to the Written Answer by Lord Ahmad of Wimbledon on 6 October (HL8334), what plans they have to disclose the government of Turkey’s response to the representations made by UK officials over allegations that the Syrian National Army may have committed war crimes against Kurdish civilians in Afrin and the surrounding area. [HL8990] END_OF_DOCUMENT_TOKEN_TO_BE_REPLACED

On 6th October 2020 the Bishop of St Albans received a written answer to a question on allegations that the Syrian National Army may have committed war crimes against Kurdish civilians:

The Lord Bishop of Leeds: To ask Her Majesty’s Government what assessment they have made of reports of the use of chemical weapons by Daesh in Iraq.

Baroness Anelay of St Johns: There are credible reports that Daesh has used chemical weapons in Iraq. The Government of Iraq, with support from the Organisation for the Prohibition of Chemical Weapons (OPCW), investigated allegations of chemical weapons use in Iraq last year and has concluded that sulphur mustard was used against Peshmerga fighters on 11 August 2015. END_OF_DOCUMENT_TOKEN_TO_BE_REPLACED

Updated: The Archbishop of Canterbury asked three written questions of Government, on conflict in the Central African Republic and on sexual violence and war crimes in South Sudan. They were responded to on 10th and 11th March 2014 by the Foreign Office Senior Minister of State, Baroness Warsi.  The questions and their replies are below.

The Archbishop of Canterbury: To ask Her Majesty’s Government what steps they are taking to support the stabilisation of the conflict in the Central African Republic, particularly in ensuring that sectarian violence does not develop into inter-religious conflict.

The Senior Minister of State, Department for Communities and Local Government & Foreign and Commonwealth Office (Baroness Warsi) (Con): We are greatly concerned by the situation on the ground in the Central African Republic (CAR). The UK provided £15 million to the humanitarian appeal and a further £2million to the African Union to cover some of the African-led International Support Mission to CAR (MISCA)’s operation. END_OF_DOCUMENT_TOKEN_TO_BE_REPLACED

“In civil wars, those who are internal to the civil conflict fight for their lives, necessarily. Those who are external have a responsibility, if they get involved at all, to fight for the outcome. That outcome must be one that improves the chances of long-term peace and reconciliation.”

On 29th August 2013, the House of Lords was recalled to take note and debate the use of chemical weapons in Syria. The Archbishop of Canterbury, the Most Revd and Rt Hon. Justin Welby, spoke during the debate. He urged that all intermediate steps before opening fire should be taken and expressed concern that intervention from abroad would declare open season on Christian communities in the country and wider region, which have already been devastated. He argued that such a consequence needed to be balanced against the consequences of inaction and that intervention would have  to be effective in preventing any further use or promotion of chemical weapons and make it more possible for Syria and the Middle East to be places without millions of refugees. 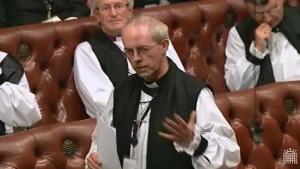 The Archbishop of Canterbury: My Lords, I welcome very much the opportunity to speak later in this debate because of the extraordinary quality of many of the contributions that have been made and how much one can learn by listening to them. Like many noble Lords I have some experience in the region, partly from this role that I have and from recent visits and contact with many faith leaders of all three Abrahamic faiths, and through 10 years of, from time to time, working on reconciliation projects.

I do not intend to repeat the powerful points that have been made on international law, which is itself based on the Christian theory of just war. That has been said very eloquently. However, I want to pick up a couple of points. First, it has been said, quite rightly, that there is as much risk in inaction as there is in action. In a conflict in another part of the world—a civil conflict in which I was mediating some years ago—a general said to me, “We have to learn that there are intermediate steps between being in barracks and opening fire”. The reality is that, until we are sure that all those intermediate steps have been pursued, just war theory says that the step of opening fire is one that must only be taken when there is no possible alternative whatever under any circumstances. As the noble Lord, Lord Alli, just said very clearly and very eloquently, the consequences are totally out of our hands once it has started. END_OF_DOCUMENT_TOKEN_TO_BE_REPLACED